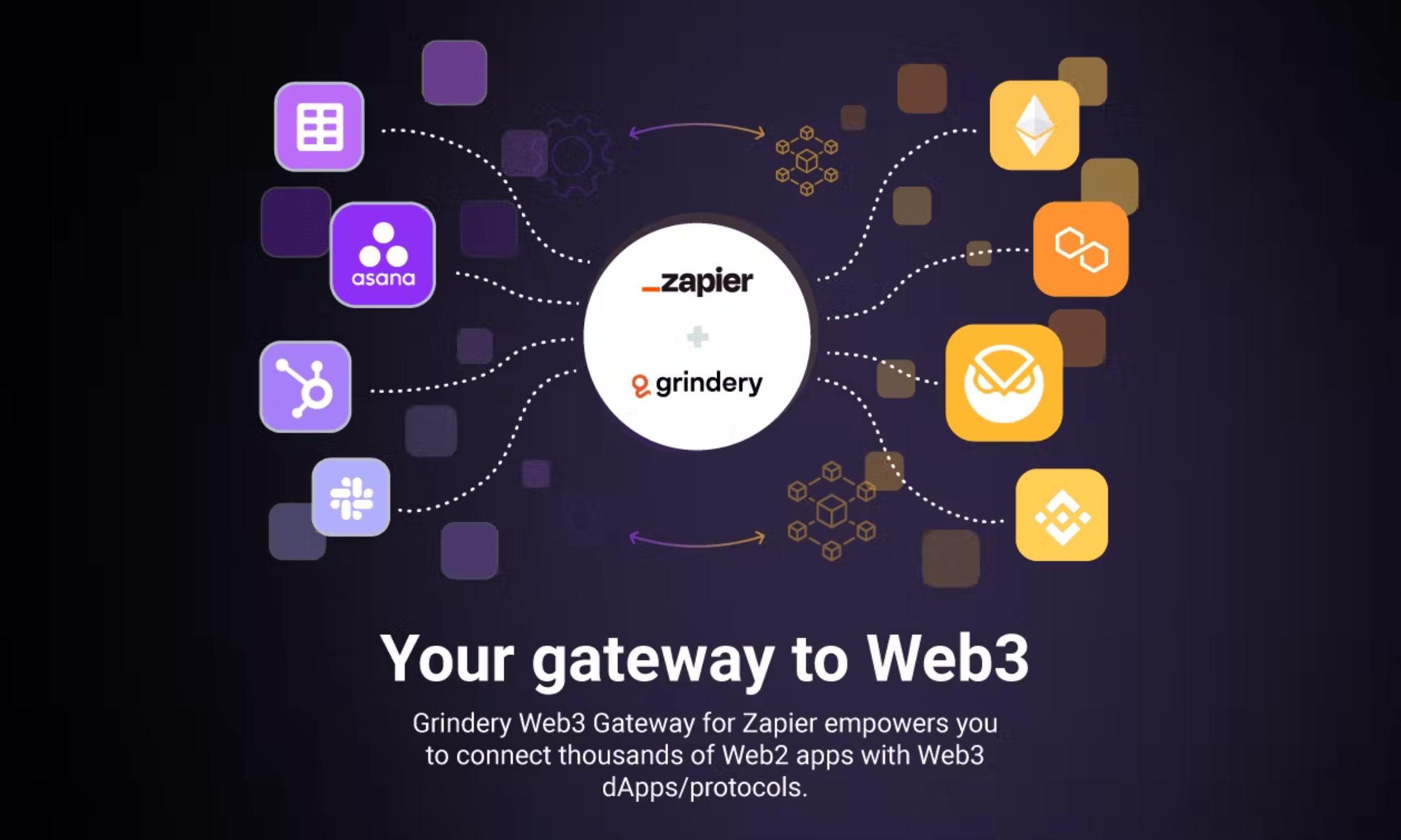 Today, the Grindery team announces a major milestone: The Grindery Gateway has launched and is now deployed on Ethereum, Binance, NEAR, Avalanche, Flow, Algorand, Harmony, Gnosis, Polygon, Fantom, Arbitrum, and Celo.  Grindery Gateway is a no-code web3 API that allows users to mint NFTs and create new workflows between web2 and web3 applications directly in Zapier with only an email address.  In striving to provide an excellent user experience, Grindery also handles gas payments for all supported chain transactions.

By making web3 technology with no-code tools, Grindery not only reduces the complexity and cost of building blockchain solutions, but also allows the no-code community to push forward on web3 innovation.

“At Grindery, we are creating a next generation integration protocol. With the release of the Grindery Gateway, users are now able to interact with a dozen blockchains using Zapier only, without writing a single line of code or paying gas fees,” says co-founder, Tim Delhaes.

Grindery is committed to the principles of web3 in its operating model and product development. Gateway is Grindery’s SaaS solution and first step towards self-decentralization of its technology and organization. Nicknamed the ‘Zapier for Web3’, Grindery Gateway is a decentralized system that can interact with smart contracts and Web2 APIs. It allows users to define workflows with time, state and event triggers to execute smart contracts as well as API (Web2) transactions.

The official launch event of the Grindery Web3 Gateway will be hosted on Product Hunt on November 29th, 2022.  Be sure to Upvote, leave a review, share the news, and try out the product by building a new integration such as:

The product has already seen successful use cases, including by Street Life Movie. This independent film about an African dance folk duo with homemade instruments that are conquering the world with their music and infectious spirit, chose Grindery and Near as a partner for their most recent campaign. To raise awareness and fundraise for their  film, the producers are minting movie poster NFTs using Grindery Gateway. The project is financed and governed on the blockchain. Visit their website and mint a free NFT on Near with only an email address to support the initiative.

Sign up for updates on the integrations users build between Web2 apps and Web3 dApps and Protocols with the Grindery Web3 Gateway.

No Code, Low Code And Web3

When it comes to developing complex software, it used to be that an organization had to rely on expert developers, costing both time and money, especially when...

Automated Oracles And The Gateway to Web3

Web3 Automated Oracles are a revolutionary technology that enables data from the web to be used in smart contracts. This technology has the potential to...

Call it a bear market or a crypto winter, or whatever you will, but the market downturn, and the high-profile collapses of certain currencies and chains is...